Scientific Proof the Bible is Authored by God

“We conclude that the proximity of ELS’s (Equidistant Letter Sequences) with related meanings in the Book of Genesis is NOT DUE TO CHANCE.”
(“Equidistant Letter Sequences in the Book of Genesis”, Statistical Science, August 1994, p.434 )
“The phenomenon cannot be attributed to ANYTHING within the KNOWN PHYSICAL UNIVERSE, human beings included.”
(“Divine Authorship?”, Biblical Review, October 1995, p.45)

Three mathematical statisticians, Doron Witztum, Eliyahu Rips and Yoav Rosenberg of the Jerusalem College of Technology and the Hebrew University, discovered words encoded in the Genesis text that was humanly impossible!
For they found related names, events and dates from the nineteenth century!

Only someone who knows the future could have placed them there!

“Our referees were baffled: their prior beliefs made them think the Book of Genesis could not POSSIBLY contain meaningful references to modern day individuals, yet when the authors carried out additional analyses and checks the effect persisted.” (“Equidistant Letter Sequences in the Book of Genesis”, Statistical Science, August 1994, p.306 )

Here’s the details of their amazing discovery:

The Hebrew text of Genesis (the textus receptus or Masoretic text, which ONLY the King James Bible is from, ALL new versions use other texts) was converted to a continual string of letters. The letters were placed into a two-dimensional array, which simply means, the letters were divided into rows, each row containing a certain number of letters. For example:

(row 1) KHASDSERYQDWHADIKOTESNSINFGBE
(row 2) HOKNFRWDSCKAPMIENNFUMIEUBEYIC
(row 3) JOLMSUDBDYIWIDIDNEYOPGHEBEBVX
Using computers, they then searched the Hebrew text. They discovered words composed of letters at various equal skip distances, or “equidistant letter sequences”. For example, every second, third or fourth letter formed the encoded words. The word “house” might look like this:

But they discovered something that was!
In “close proximity” were related word-pairs. For example, the researchers found the name “Zedekiah” (a sixth century B.C. king of Judah) and in “close proximity” was the word “Mantanya” which was Zedekiah’s original name! They found “Hanukkah” (the Jewish festival that commemorates the re-dedication of the Temple after it was recaptured from the Assyrians in the second century B.C.) and in close proximity was the word “Hasmoneans” which was the family name of the leaders of the Jewish armies that took the temple from the Assyrians for which Hanukkah celebrates!

It was humanly impossible for the author of Genesis to know this in 2300 B.C.! Not to mention the impossibility of encoding meaningful related “equidistant letters” into a text and then the text itself make sense!

The researchers selected, at random, 300 such related Hebrew word-pairs from names and events that occurred hundreds and thousands of years after Genesis was written. And of these 300 related name-event pairs.

Looking for some coincidental explanation they searched for the word-pairs in simple randomized tests! But they were not found! The word-pairs were ONLY found in close proximity to each other proving irrefutably that the encoded word-pairs were not coincident or accident but were intellectually encoded by a superior intelligence! 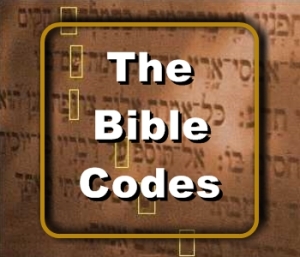 One fact is crystal clear — the Author of Genesis was not human!

“The capacity to embed so many, meaningfully related, randomly selected word-pairs in a body of text with a coherent surface meaning is stupendously beyond the intellectual capacity of ANY HUMAN BEING or group of people, however brilliant, and equally beyond the capacity of ANY CONCEIVABLE COMPUTING DEVICE.” (“Divine Authorship?”, Biblical Review, October 1995, p.31)
Five distinguished mathematical scholars, two from Harvard, two from Hebrew University and one from Yale, issued the following statement:

“The present work represents serious research carried out by serious investigators. Since the interpretation of the phenomenon in question is enigmatic and controversial, one may want to demand a level of statistical significance beyond what would be demanded for more routine conclusions… [T]he results obtained are sufficiently striking to deserve a wider audience and to encourage further study.” (Biblical Review,”Divine Authorship?”, October 1995, p.31)
More demanding tests were performed …

And more discoveries were found!

The skeptical scientists went one step further. . . Instead of searching for simple pairs of related words, they took the Hebrew reference book, The

Encyclopedia of Great Men in Israel (Margalioth, M., ed. (1961)) and found the 34 most prominent men in Israeli history from the ninth to the nineteenth centuries! They paired the names with the day of birth or death (Hebrew numbers are represented as letters). The author of Genesis could not possibly foresee these men 4,000 years before their birth and definitely not their birth or death date — UNLESS THE AUTHOR WAS GOD!

Using the computer analysis, the scientists searched the Hebrew text for the 34 name-date pairs. Remember, they had to be “equidistant” and in “close proximity” to register a “hit”. And how many did they find?

ALL 34 NAMES AND DATES WERE FOUND!!!
The bewildered scientists were baffled!

This was not HUMANLY possible!
Not believing what they were seeing they repeated the test. They picked the next 34 most prominent men from the encyclopedia. Because the dates of the death for 2 of these men were not known, the second test included 32 men. And how many did they find?

There is not the least possible chance that these findings were an accident!

Someone with a far superior intelligence than you or I had to have encoded these prophetic names, dates, and events!

“The phenomenon cannot be attributed to ANYTHING within the KNOWN PHYSICAL UNIVERSE, human beings included.” (“Divine Authorship?”, Biblical Review, October 1995, p.45)
In other words there is only ONE possible explanation GOD!

“What then was the purpose of encoding this information into the text? Some would say it is the Author’s signature. Is it His way of assuring us that at this particular, late moment-when our scientific, materialistic doubt has reached its apotheosis, when we have been driven to the brink of radical skepticism- that He is precisely who He had said He is. . .” (“Divine Authorship?”, Biblical Review, October 1995, p.45)
The researchers ran the same tests using the Samaritan Pentateuch, which is slightly different from the textus receptus or Masoretic text. According to Biblical Review (p.44) “the phenomenon was UTTERLY LACKING in letter-level variants. . .” They also tested other texts sacred and secular but no such findings existed in ANY OTHER TEXT! Only the textus receptus! The textus receptus is the text for the King James Bible! The new versions do not use the textus receptus. The new versions are NOT the words of God!

Friend, there is no doubt the King James Bible is the word of God.

And there is no doubt you will one day stand before God.

The Bible says in Hebrews 9:27, “And as it is APPOINTED unto men once to die, but after this THE JUDGEMENT.”

Macro Codes and Micro Codes of the Bible

In order to prove that the Bible is the Word of God, divinely inspired by Him one would have to prove that it’s message originated in eternity, transcending time and space as we know it, the product of an infinite mind.

One way in which we can see evidence of this is in the use of “Macrocodes” and “Microcodes” throughout the biblical text.

By using these codes throughout the Bible, God has shown that it is much more than just an historic account of the nation of Israel and the story of the redemption of the human race and the restoration of His kingdom on earth.

Macro-codes are large-scale elements which include literary devices such as Allegories, Metaphors and some Prophetic Passages.

As far as the prophetic macro-codes are concerned the Jewish perspective on prophecy is more than just foretelling the future and seeing it come to pass. The Hebrew mind sees pattern in the prophecy as well.

The entire book of Ruth is prophetic in nature, depicting in types and shadows the relationship between Jesus and His Bride, the Church. Naomi represents Israel, Ruth is the Church, the Gentile Bride and Boaz is a type of Christ , the Kinsmen Redeemer.

A full one-third of the Bible is prophetic in nature. It simply cannot be compared with any other literature, religious or otherwise.

For a prophetic Macro-code to fail someone integral to the narrative has to disobey God. For instance, Moses disobeyed God when he hit the rock instead of speaking to it, like God instructed him to.

In so doing, he grossly misrepresented God and messed up the prophetic symbolization God wanted to demonstrate and for this, Moses missed entering the promise land as just punishment.

Micro-codes are  small-scale text-based elements like Acrostics and the Equidistant Letter Sequences popularized by Yacov Rambsel and Grant R. Jeffrey.

The Equidistant Letter Sequence is applied by consistently counting a specific number of letters from a particular point in a sentence and recording the letter after each interval.

All the captured letters are then placed one after the next, spelling out a significant word or phrase.

As an example, in Genesis chapter 2 we find the phrase, “And out of the ground made the Lord God to grow every tree that is pleasant to the sight and good for food.”

Using ELS we find that Genesis chapter 2 also contains the encoded names of every tree mentioned in the entire Old Testament.

In Genesis chapter 2 we also find the phrase, “And out of the ground the Lord God formed every beast of the field, and every fowl of the air.”

Again, this same chapter also contains the encoded names of every animal mentioned in the entire Old Testament.

In Genesis 1:29 “God said, Behold, I have given you every seed-bearing plant on the face of the earth, and every tree that has seed-bearing fruit”

Embedded in that same text are the names of seven species of seed-bearing fruit: Barley, Wheat, Vine, Date, Olive, Fig, and Pomegranate.

Finally, Isaiah 53:10 is a prophetic passage about Jesus’s atoning sacrifice for sin.

Mathematicians calculated the probability of this occurring randomly and found it to be 1 chance in 50 quadrillion, in other words… impossible!

The bottom line is, both Macro-codes and Micro-codes in the Bible convey design.

If there is design, there must be a designer. Design by nature can’t happen randomly.

This is irrefutable proof that the Bible is indeed divinely inspired.

When we consider the Bible Codes and see the clear evidence of design it tells us that the Bible is much more than mere eye witnesses accounts and the recorded preaching of God’s Messengers.

Consider this, if one single letter is out-of-place in an entire chapter every dependent ELS Code will fail!

It is believed by Jewish Rabbis that God gave the Torah – First 5 Books of the Bible – to Moses letter by letter!

In any case, the specific design displayed throughout the Bible leads one to conclude that God guided the Bible writers on precisely what to write and how to write it.

Conclusion: The Bible was not written by men but God himself wrote it merely using men to record the precise message He wanted mankind to have.